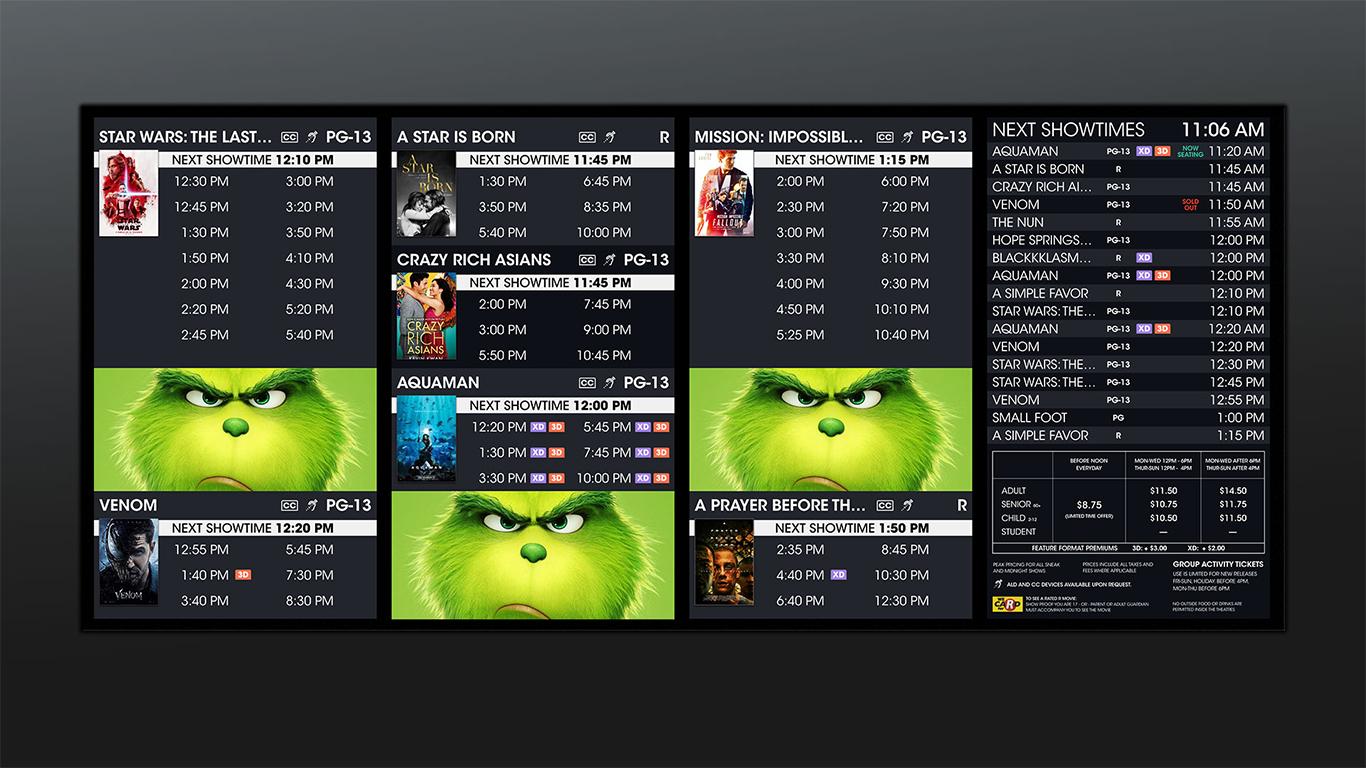 Pacific Theaters is a movie cinema chain with eight locations throughout the Los Angeles, California metropolitan area. The Decurion Corporation, its parent company, wanted to create a more intuitive digital product that would, from a central location, automate the flow of movie schedule information to large multi-screen LCDs in the lobbies of their cinemas.

The Problem
The existing screen displays did not make efficient usage of the screen area available. The design was also not cohesive with the rest of the cinema's inconsistent branding. I had the opportunity to be invited to one of the cinemas to have a first-hand view, as seen in some photos I took below. 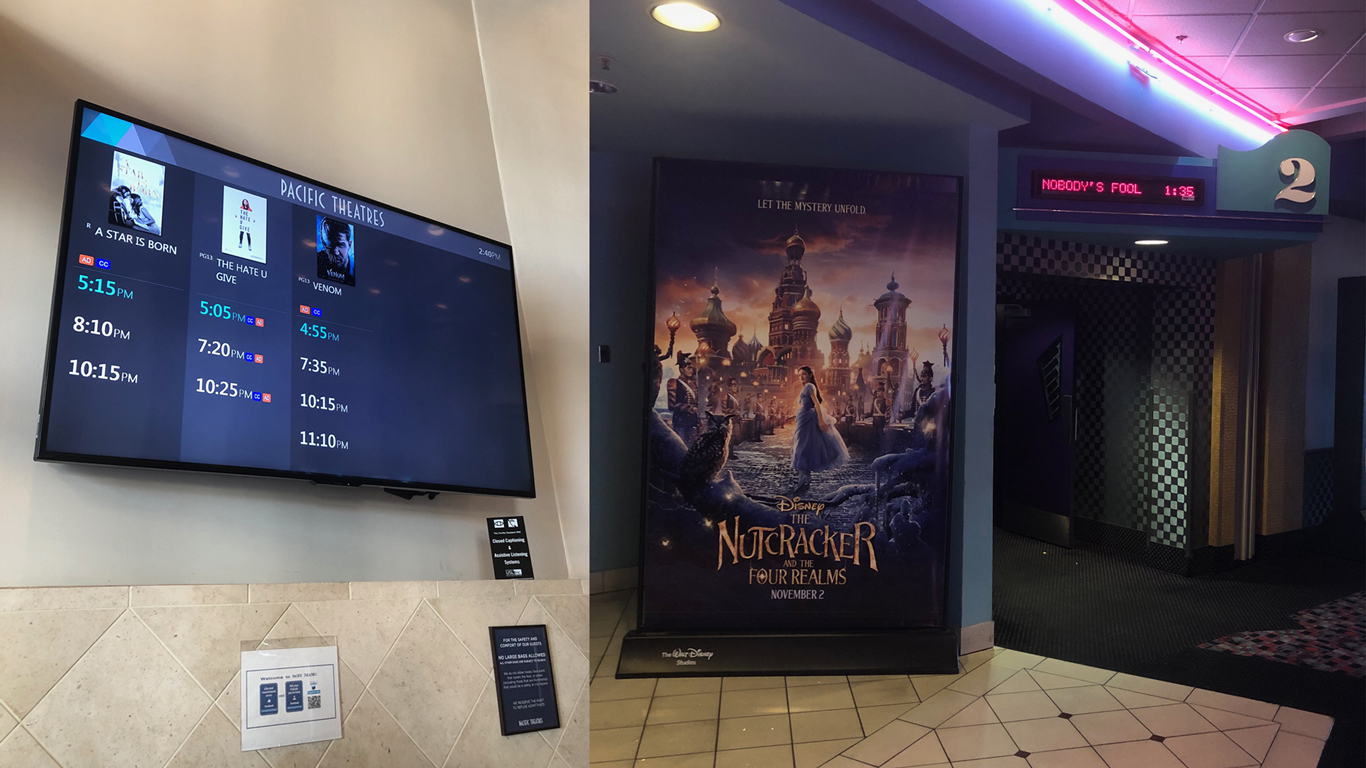 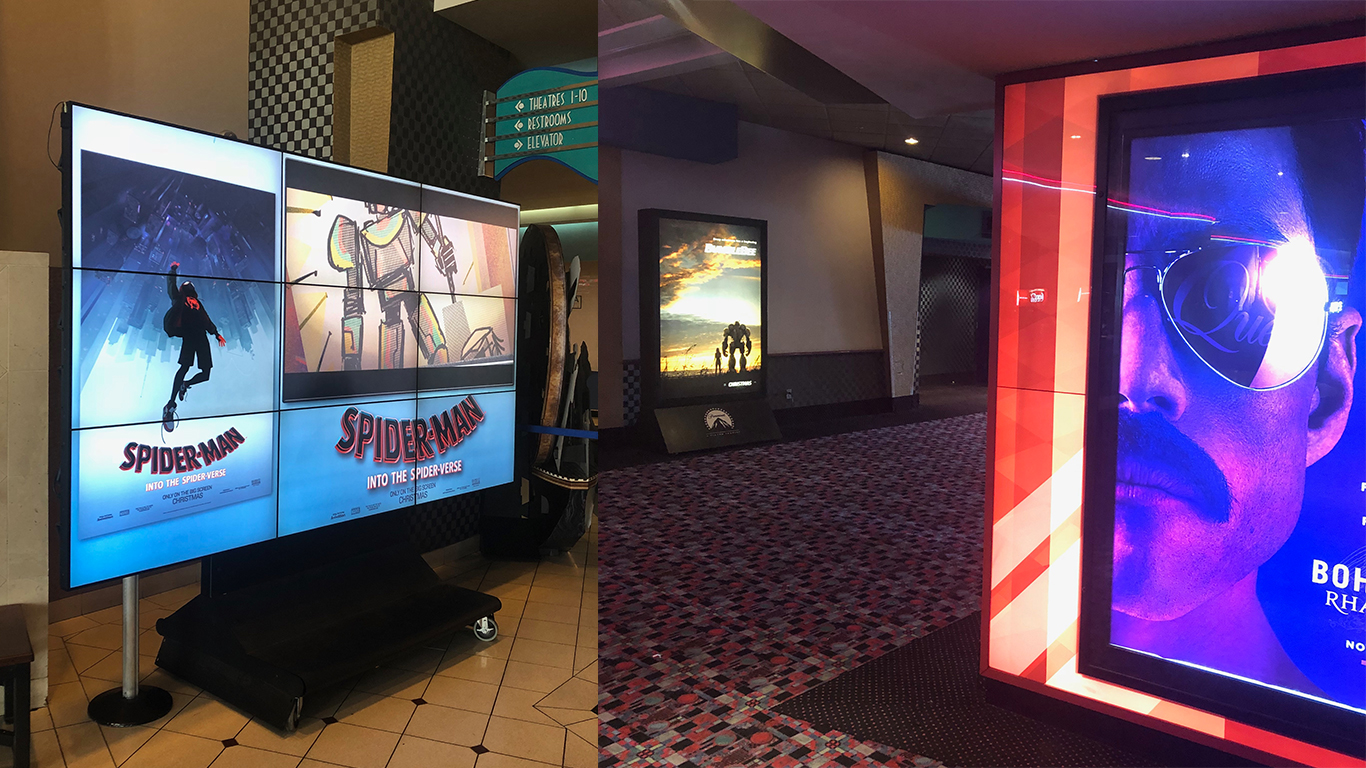 Problem: Existing single and multi-screen displays at Pacific Winnetka Theater in Chatsworth, CA.
The Scope + Restraints
Pacific Theaters wanted to use both single and multi-screen displays in their cinemas. These displays were already being used in some of their other cinemas, but not efficiently or effectively. The cinema chain itself had no way to manage or create visual digital assets. Assets were created and provided by the movie production studios. For the most part, these assets were not responsive to the displays.

We were given a very short time, roughly a month, to go through an agile iterative process to understand the scope and requirements and provide a high-fidelity prototype as a proof of concept.
The Team + My Role
I was responsible for finding a solution for displaying movie information for visitors via a newly redesigned Box Office signage system supported by SAP S/4HANA. The solution would need to be heuristic for moviegoers, and not overwhelming to their experience.

I worked remotely and onsite with stakeholders from Decurion, including the VP of Systems Strategy, the VP of Information Technology, the Product Manager, the UX Lead and Developers based in India, to understand the requirements of the user and the challenges of implementing SAP S/4HANA software.

With SAP, the box office signage system can be autonomous, intuitive, and have the capability to pull data from a central automated source. This project also allowed for the complete redesign of the user interface, which was in line with the complete design overhaul of all of the digital products we worked on, including a desktop financial application and a mobile Usher App.
The Process
Using airport arrival and departure displays as inspiration, I worked remotely alongside Pacific Theater stakeholders, the UX Lead and Developers based India, using a Lean and Kanban approach to design a display system that would responsively list relevant movie information linked from SAP S/4HANA  (including movie name, showtime, movie attributes, and rating).
Discovery 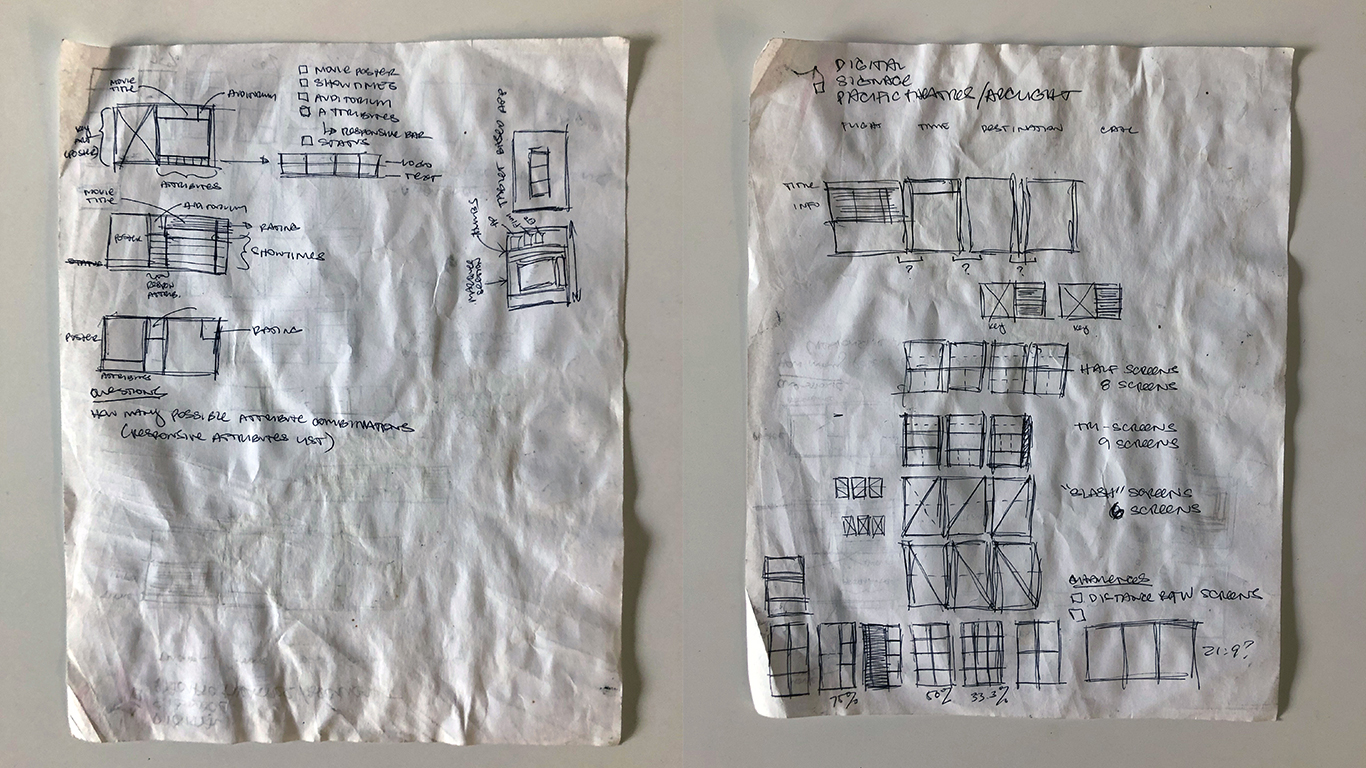 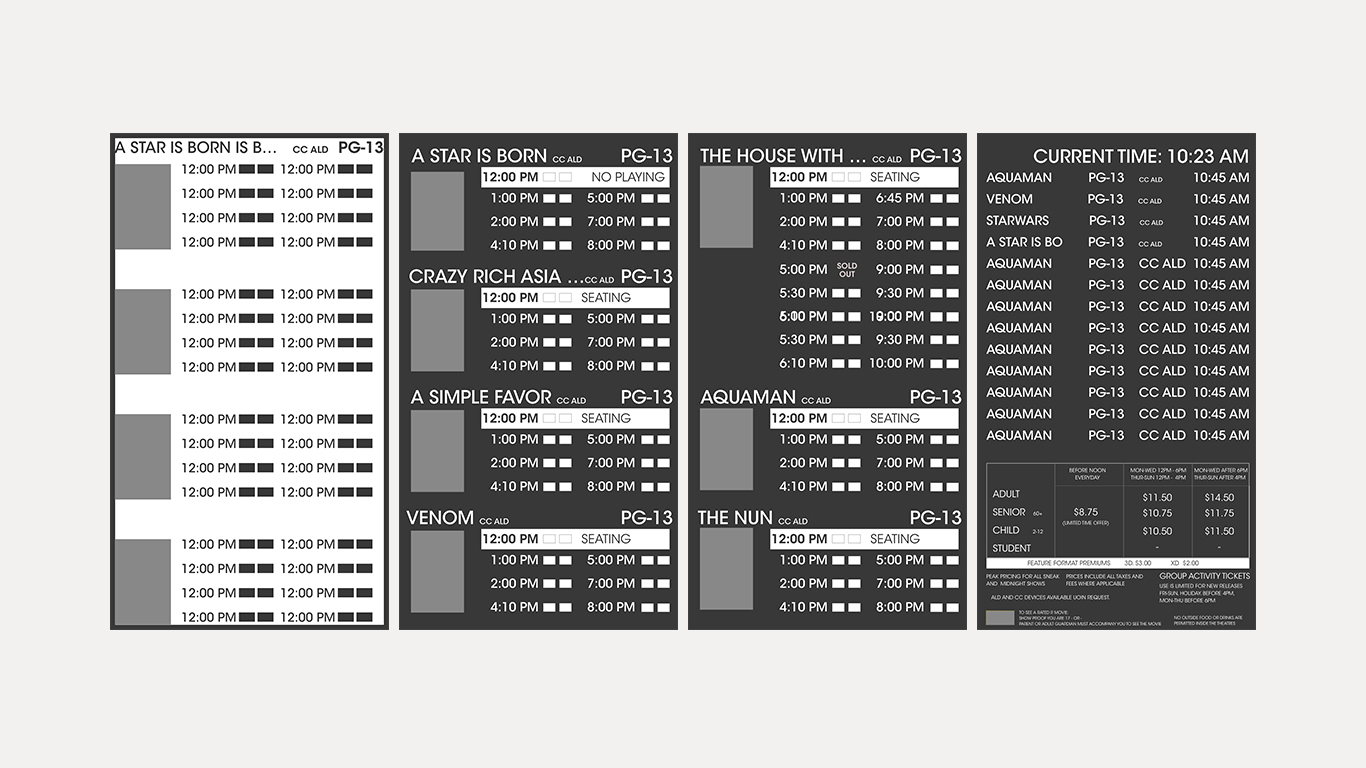 Wireframes exploring responsive content, including movie time, rating, attribute and status.
I created several iterations of wireframes to investigate how to display relevant information in four large 65" horizontal LCDs, experimenting with both a light and dark user interfaces.

Early exploration suggested a structure where the first three screens (from left to right) would slide left to display a "fourth" screen containing additional movie info when necessary. The last screen would slide up, displaying the respective movie info in a list view. The fourth screen would also need to display additional info about ticket prices, usage of hearing-impaired devices, etc.
The Solution 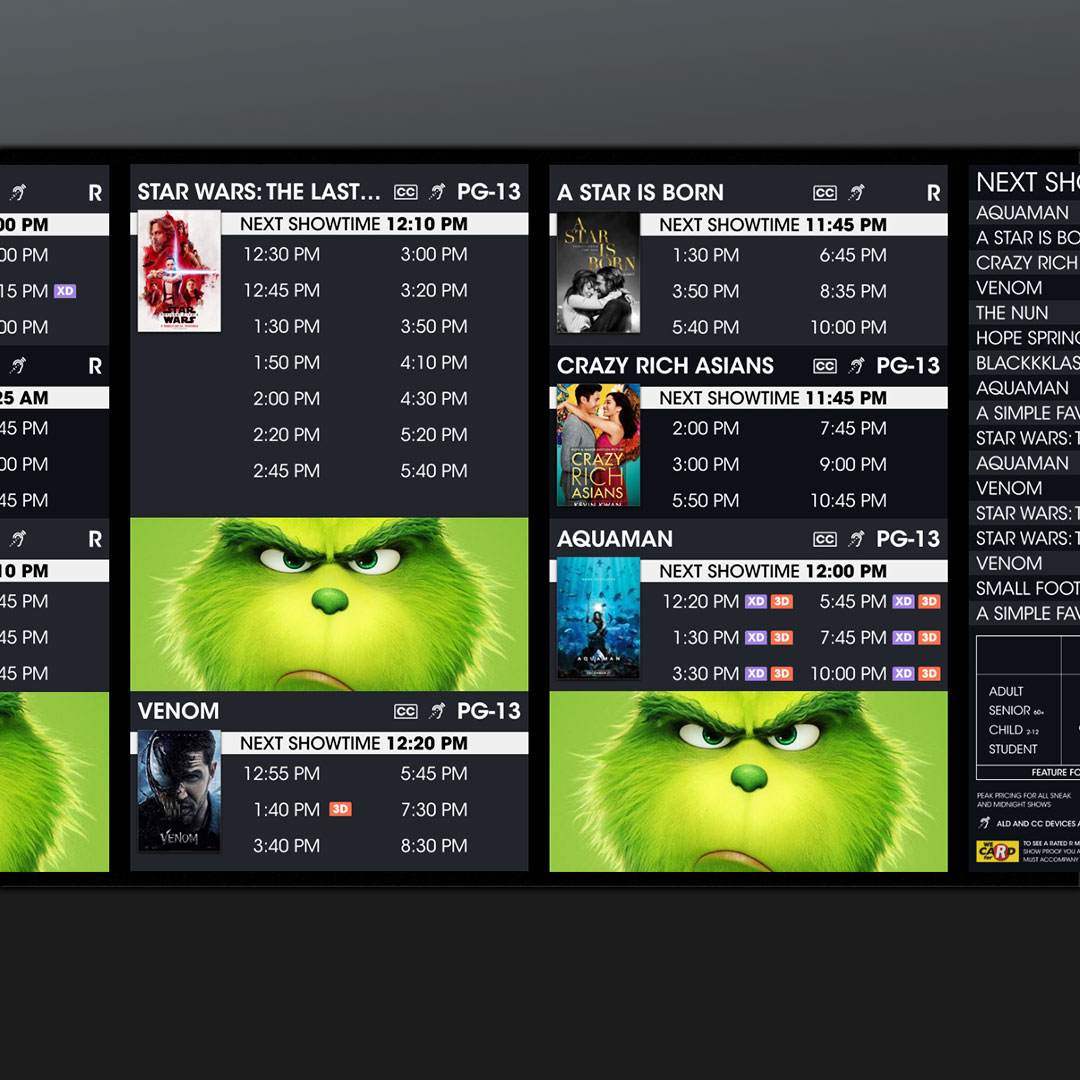 Large LCD Multi-Screen Display
The image (above) shows the version of the design solution I created with a "takeover" theme. In this case, the takeover is The Grinch" movie which utilizes "empty" areas as ad space, or to market the cinema chain's products, services, and/or special events. This "takeover" concept was well accepted by stakeholders, as it may allow the cinema chain to earn additional advertising revenue.

LCD Marquee Display
Finally, in replacing the old LED marquee display, I created a responsive user interface (above) for the new LCDs to be placed at the entrance of the individual movie theaters.

All of Us Medical Research Mobile Exhibit